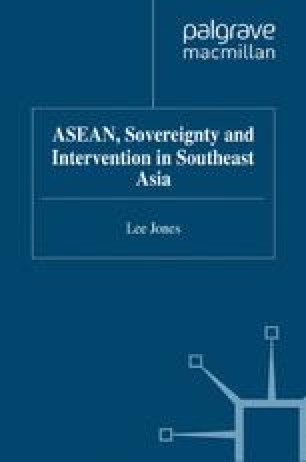 ASEAN, Sovereignty and Intervention in Southeast Asia pp 128-149 | Cite as

Cambodia: From Cold War to Conditionality

The change wrought by the defeat of communism and the rise of a new business class on ASEAN’s practice of (non)interference is very clear in the case of Cambodia. To insulate their own societies from Indochina’s communist forces, ASEAN had fuelled a bitter proxy war in Cambodia for over a decade. However, when communism was defeated in ASEAN countries — partly through this intervention — the war became obsolete. Powerful business groups began demanding that the conflict be terminated to permit them to exploit lucrative opportunities in neighbouring markets. Combined with Vietnam’s decreasing capacity and willingness to continue fighting, and the end of the Cold War, this led to a serious push to settle the conflict. This required an unprecedented UN intervention, encouraged and participated in by ASEAN, which organised elections that generated a power-sharing coalition between parties representing the former communist regime and the anti-communist FUNCINPEC.

Security Council Foreign Minister Business Interest ASEAN State Business Elite
These keywords were added by machine and not by the authors. This process is experimental and the keywords may be updated as the learning algorithm improves.

In the case of Cambodia, we were very much involved. We actually interfered… we set up the state, the rules and the conditions, and we built Cambodia… We were quite strict, stern, on making our demands when there was a coup [in 1997]… we felt that Cambodia was ‘our baby’, you know — we took a lot of trouble to set up the international conference on Cambodia, we fought many years against Vietnamese, 10, 11 or 12 years of resolutions. So it was our special interest.

[Cambodian Prime Minister] Hun Sen was livid with rage… he gave a half-an-hour criticism of me when I first met him… He said, ‘this is foreign interference! This is against ASEAN’s own principles! What are you doing here? You have nothing to do with what is happening to Cambodia! I don’t want to become a member of ASEAN, not with that kind of organization!’