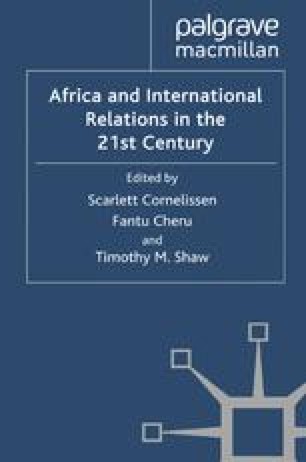 Authority in Africa is increasingly exercised beyond the state. Likewise, forms of sovereignty are practised in settings that are not territorialized as ‘states’. In much of the continent after 1989 and the end of the Cold War, accelerated processes of globalization and the weak institutionalization of the post-independence state contributed to the demise of the state as the major regime of territorialization. Processes of deterritorialization – the unmaking of an established regime of territorialization such as the international order of (nation) states – have taken different forms: economic liberalization and Poverty Reduction Strategy Papers (PRSPs), the outsourcing of functional domains, violent contestation and so on. Different actors contribute to and participate in these processes, including Africa’s political elites, multinational companies, ‘informal’ traders, warlords and their middlemen, the so-called community of states providing ‘development assistance’, imperial interventions such as the ‘war on terror’ regime and International Non-Governmental Organizations (INGOs). As a result, much of the continent is seeing the emergence of new regimes of territo- rialization, including reordered states, complex transnational regimes, subnational entities, new localities and transborder formations. From the perspective of the historicity of international relations (IR), parts of the African continent have entered a phase for which the outcome cannot yet be predicted.

Shadow Economy African State Comparative Politics Informal Trade International Relation
These keywords were added by machine and not by the authors. This process is experimental and the keywords may be updated as the learning algorithm improves.
This is a preview of subscription content, log in to check access.