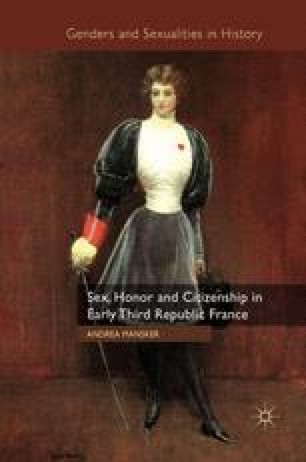 While feminists used the female surfeit controversy to propose a sexless form of honor, they adopted a different tactic when confronting national concerns over the venereal peril, male adultery, and the police des mœurs at the turn of the century. Rather than downplaying the significance of sexual reputation for women, female activists leveraged their own roles within the honor system as guardians of familial legitimacy and sexual discipline to publicly police manhood. By doing so, they worked to undermine the republican ideal of male potency as the foundation for suffrage. Feminists thus appropriated the “honest woman” stereotype to assert the political relevance of men’s private behavior and to display their own capacity for civic rights.

Venereal Disease Penal Code Honor Code Legislative Proposal Male Sexual Behavior
These keywords were added by machine and not by the authors. This process is experimental and the keywords may be updated as the learning algorithm improves.
This is a preview of subscription content, log in to check access.

Cite this chapter as:
Mansker A. (2011) Sexual Citizenship and the Political Culture of Shame in the Women’s Movement. In: Sex, Honor and Citizenship in Early Third Republic France. Genders and Sexualities in History. Palgrave Macmillan, London. https://doi.org/10.1057/9780230348196_7