The Political Economy of Capital Market Reforms in Southeast Asia 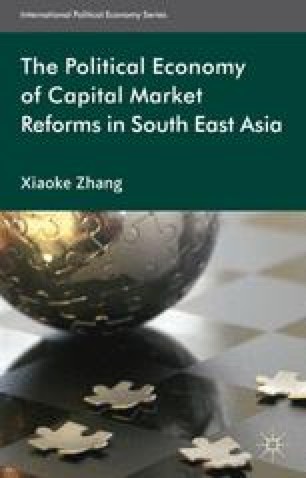 In Malaysia, as in Singapore and Thailand, initial efforts to reform the capital market were made in the aftermath of the global recession of the mid-1980s and associated domestic economic woes. While the timing of market reforms and external stimuli to these reforms were comparable, the pattern of regulatory changes in Malaysia displayed striking differences. Political elites were generally able to align reform programmes with public policy purposes but simultaneously used reforms as a vehicle for pursuing particularised interests. Equally importantly, while the Malaysian government had a demonstrated ability to enact largely decisive reform policies, they were less capable of sustaining these policies. The central argument is that the public-regarding incentive of policy-makers that stemmed from party system concentration was significantly undercut by intraparty conflicts and rampant factionalism within the UMNO, which spawned particularism in the reform process. Similarly, party concentration facilitated policy decisiveness but intra-party organisational weaknesses compromised reform resoluteness. The upshot is that capital market reforms were more successful in Malaysia than in Thailand but less so than in Singapore.

Corporate Governance Market Reform Party System Asian Crisis Security Industry
These keywords were added by machine and not by the authors. This process is experimental and the keywords may be updated as the learning algorithm improves.
This is a preview of subscription content, log in to check access.