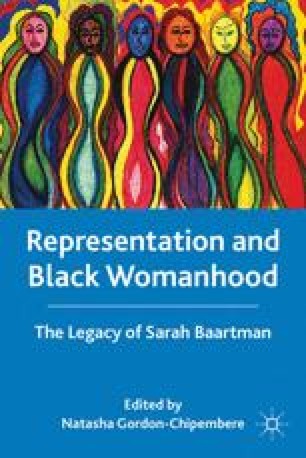 Placing and Replacing “The Venus Hottentot”: An Archeology of Pornography, Race, and Power

In 2009, The New York Times included Sarah Baartman on its list of “Top Ten Plundered Artifacts.”1 The list was created as a side bar to the well-publicized conflict between the government of Egypt and the Louvre concerning the return of fragments of ancient Egyptian frescos. The thrust of the article was twofold: to examine the value of “plundered art and antiquities” and the conflicts their contested ownership created. Baartman appears as number four on the list, sandwiched between the Elgin Marbles and Ramses’s mummy, the only other “item” on the list of the plundered artifacts that is a human body. Unlike Baartman, whose body and genitalia were exhibited for over a century before her burial, Ramses’s body is immortalized and complete; he was rev- erenced and buried appropriately before his body became a cap- tive. In short, her body was dehumanized while his was deified. In the expanded story about Baartman, The Times adds that “The Hottentot Venus was not a piece of art at all. Instead, it-rather, she-was a person named Sarah Baartman.”2 The article is an interesting commentary on the value of Baartman’s body and her place as an object, even contemporaneously. Nearly 200 years after her death in 1815, Baartman’s body is easily defined as an object before she is revealed to be a “person.”

Sexual Desire Internet Pornography Hypersexual Disorder Political Upheaval Racial Hierarchy
These keywords were added by machine and not by the authors. This process is experimental and the keywords may be updated as the learning algorithm improves.
This is a preview of subscription content, log in to check access.