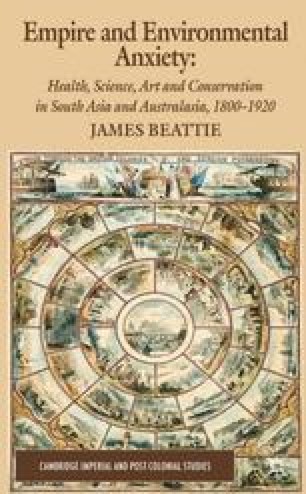 As these quotes demonstrate, the pervasiveness of nineteenth-century European belief in the power of environments to affect health meant that discerning and mitigating its adverse effects took on particular importance in empire. Contemporaries held that imperialism displaced European bodies, and sometimes even minds, by subjecting them to unknown environmental influences, the effects of which could have immediate and far-reaching impacts. Tropical climates sapped the fighting powers of British soldiers or prevented administrators from efficiently overseeing empire while by the early-twentieth century, the spectre of white degeneration in the settler colonies and in India haunted policymakers, leading to increased government intervention in society to alleviate its ill effects. To colonists, indeed, the very security of the British Empire seemed to hinge on the interaction of people and environments. Fears of tropical climates prevented permanent European migration to India and, at different times, to parts of tropical Australia, but made India’s higher altitudes attractive, along with migration to temperate parts of Australasia. Europeans encountered existing unhealthy environments, but could also, through pollution, create equally dangerous places. As well as facilitating the migration of people from India to Australasia, anxieties about the environmental impacts on health stimulated detailed environmental health surveys, anti-pollution legislation, urban tree planting, and the introduction of plants such as eucalyptus, which were believed to improve the health of a particular locality.

Tropical Climate Late Nineteenth Century Health Anxiety Eucalyptus Globulus Hill Station
These keywords were added by machine and not by the authors. This process is experimental and the keywords may be updated as the learning algorithm improves.

[A] country is of little importance for colonization, even if food grows fast, so long as the climate causes those who cultivate it to decay.1

Fever is the great scourge and calamity of India, for natives as well as Europeans.2