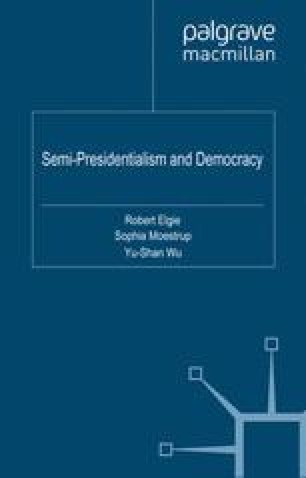 Semi-Presidentialism and Democracy pp 229-245 | Cite as

Semi-Presidentialism in the Weimar Republic

A Failed Attempt at Democracy
Chapter

The Weimar Republic is an important case for the study of semipresidentialism for two reasons: Weimar was one of the first semi-presidential countries, and it was an attempt at democracy that failed. In this chapter, I define Weimar’s semi-presidentialism as a “vertical dual executive system,” meaning that the president and/or the premier could be the real political leader at the same time. The designers of the constitution intended the president to play a moderating role during normal times and to serve as a political leader in reserve in the event of an emergency. However, because of the fragmented party system, parliament remained powerless. The actual operation of the state transgressed the essence of the constitution after 1930 and finally caused the breakdown of Weimar’s democracy.

Grand Coalition Party System Coalition Government Parliamentary Election Executive Power
These keywords were added by machine and not by the authors. This process is experimental and the keywords may be updated as the learning algorithm improves.
This is a preview of subscription content, log in to check access.