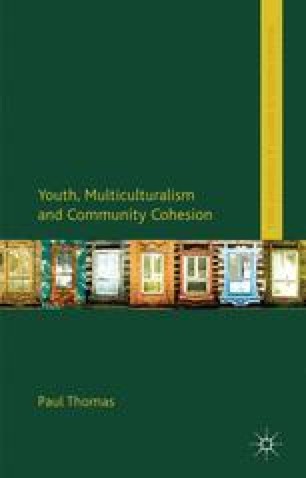 Chapter 6 discussed how we might understand the strong preference for religious faith forms of identity amongst the Muslim young people surveyed in light of the political and media discourses that have portrayed Muslim youth identities as highly problematic and potentially dangerous to society. The thesis of community cohesion (Cantle, 2001, 2005) has suggested that ethnic segregation and a one-sided policy focus on separate ethnic identities, rather than on commonality, can create exclusive and oppositional identities and attitudes amongst all communities, including majority white communities. Indeed, the events of the 2001 riots in Oldham, Burnley and Bradford, as discussed in Chapter 1, suggested widespread, taken for granted attitudes of racial exclusiveness and antagonism to local Asian communities amongst white communities in those areas. The existence of such attitudes nationally has arguably been confirmed by the significant growth and move towards the political mainstream of the British National Party, a far-right party with overtly racist policies and roots in fascist ideologies (Copsey, 2008), and the rise of the English Defence League (Eatwell and Goodwin, 2010). Accompanying this political development of the past decade has been increasing claims that white people, especially the white working class, are the ‘real’ victims of racism within a policy regime of one-sided bias towards ethnic minorities, prompting both a ‘white backlash’ (Hewitt, 2005) and claims of actual racial inequality for white people (Gilborn, 2009).

Young People Ethnic Minority Ethnic Diversity White People Community Cohesion
These keywords were added by machine and not by the authors. This process is experimental and the keywords may be updated as the learning algorithm improves.
This is a preview of subscription content, log in to check access.