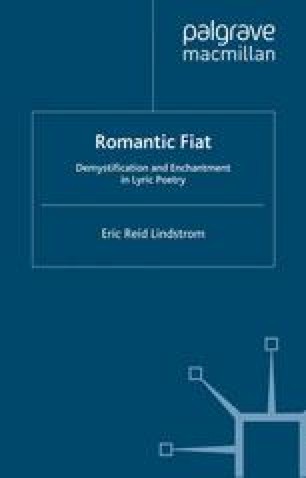 The Command to Nature

During a moment of explanatory transit in his book A Defense of Poetry: Reflections on the Occasion of Writing, Paul H. Fry makes an arresting comment. Pointing to two of this book‘s major exhibits — ‘The Old Cumberland Beggar’ and ‘Tintern Abbey’ — Fry observes how ‘Wordsworth puts his most disarming form of apostrophe, the one in which nature is told to do … what it would have done anyway, to an unusual purpose which gains its effect precisely from the appearance of having told things to go ahead and be themselves.’1 From the canonical precedents of Wordsworth to Jane Taylor’s 1806 lyrics for the poem ‘The Star,’ which we all know popularly as ‘Twinkle, twinkle little star,’ a grouping of major poems from the British romantic period relies on delivering such commands to nature to obtain their full effects.2 These poems and effects constitute the subject of this chapter, which sustains a particular focus on how ‘Tintern Abbey’ responds to what one important feminist critic has called ‘the uncontrollability of real things.’3 An obvious question follows. How does that independent Real sort with the poetry whose vocal register moves toward, or upon the premises of, command? Or can it?

Romantic Lyric Natural Beauty Transitional Object Henry VIII Western Ridge
These keywords were added by machine and not by the authors. This process is experimental and the keywords may be updated as the learning algorithm improves.
This is a preview of subscription content, log in to check access.