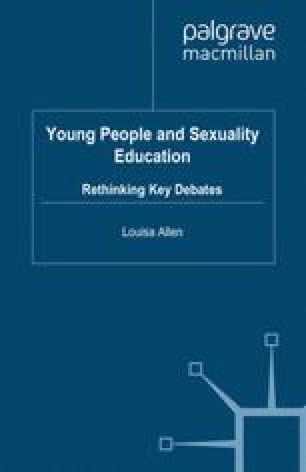 How might we re-imagine sexuality education? This book attempts to answer this question with reference to empirical research with young people. In asking this question I attempt to reframe debates around the nature of sexuality education content and delivery. Traditionally, in Anglo-speaking countries these debates have hinged on the appropriateness of including ‘safer sex’ or more controversial topics like ‘pleasure’ within the curriculum. Decisions about such inclusions have been saturated by concerns of morality and propriety. Curriculum adoption of such topics is also influenced by the institutional context of schooling and its plethora of regulatory practices. This book is concerned less with the politics of the curriculum, than envisioning its possibilities. These politics have been comprehensively delineated by an important body of work which reveals numerous obstacles to sexuality education’s development and delivery (Haywood, 1996; Irvine, 2002; Monk, 2001; Moran, 2000; Sears, 1992; Thomson, 1994). Such important insights are not dismissed by the ensuing chapters. However, it might be argued that curriculum politics have had a stultifying effect with regards to conceptualising and engaging sexuality education in radically new ways. This book is an attempt to move sexuality education debates beyond immobilising statements like, ‘you won’t be able to do that in schools’. Instead, it is concerned with how we might re-envision sexuality education in ways that reconfigure and exceed its current boundaries.

Young People Sexual Health Sexuality Education Unintended Pregnancy Sexuality Research
These keywords were added by machine and not by the authors. This process is experimental and the keywords may be updated as the learning algorithm improves.
This is a preview of subscription content, log in to check access.