The Unsociable Sociability of Women’s Lifewriting 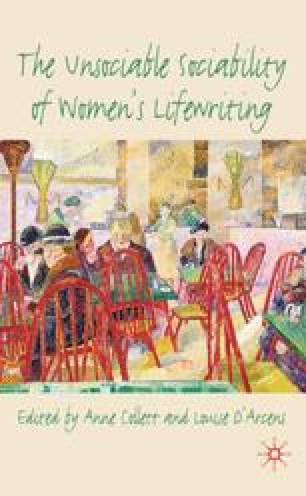 Law, Gender and Print Culture in the Lifewriting of Eliza Frances Robertson

Relationships between public discourse, autobiographical writing and gender merge in Eliza Robertson’s legal disputes and imprisonment for debt as a ‘swindler’ in early nineteenth-century England. The newspaper press took a strong interest not only in Robertson’s swindling, business dealings and litigation with her creditors but also in her gender and sexuality, destroying both her commercial and her personal reputation. Effectively silenced by the justice system, Robertson used autobiographical writing to challenge what she perceived to be misrepresentations of herself in public discourse and legal process. Her autobiographical writing reveals tensions between the competing claims of the sociable and the unsocial, as she simultaneously seeks to challenge public representations of her character and also to construct an autonomous and socially detached self. Robertson’s autobiographical acts — her writing and publication of her life in not one but three forms — demonstrate a strong desire to privilege the social dimensions of selfhood. It matters to Robertson what journalists, lawyers, judges and the public at large think of her, and her publications are designed to counter public constructions of her character and her damaged reputation.1 Yet the self that Robertson presents in her autobiographical writing is distinctly unsocial in being determinedly individualistic. Indeed, Robertson’s protestations of innocence are underpinned by her story of self-reliance, abandonment by family and friends (excepting her partner Charlotte Sharpe), and victimization by creditors, lawyers and judges. Robertson exploits the tradition of the ‘scandalous memoir’ to balance these competing interests in her autobiographical writing.

Financial Gain Public Sympathy Charitable Donation Monthly Visitor Press Report
These keywords were added by machine and not by the authors. This process is experimental and the keywords may be updated as the learning algorithm improves.
This is a preview of subscription content, log in to check access.