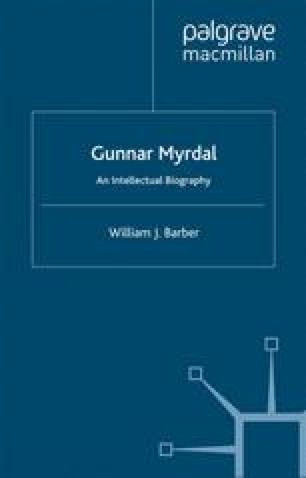 An American Dilemma: The Negro Problem and Modern Democracy (1944)

Over Myrdal’s long and multifaceted career, the preparation of An American Dilemma: The Negro Problem and Modern Democracy stands out as a signal event. In the United States particularly, those who may be totally ignorant of his fundamental achievements in economics are likely still to identify him with this book. It was massive in scale: just under 1500 pages in all (including 10 appendices). The outlays needed to complete it were record-shattering for a body of research in the social sciences — some $300 000 in 1930s dollars (or roughly ten times that sum if measured in dollars of the early twenty-first century). And the work had impact. It can properly be regarded as one of the few works of scholarship to alter the course of history.1 Even so, at a point or two along the way, it was touch-and-go whether or not this project would be brought to fruition.

Negro Culture Moral Idea Cumulative Causation Racial Matter American Dilemma
These keywords were added by machine and not by the authors. This process is experimental and the keywords may be updated as the learning algorithm improves.
This is a preview of subscription content, log in to check access.