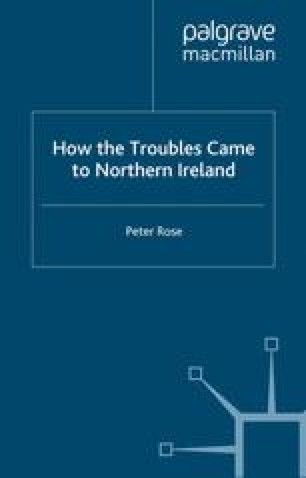 Research for this book was approached with an open mind about the effectiveness or otherwise of the Labour governments’ Northern Ireland policy prior to August 1969. This, broadly, was nonintervention in the governance of Ulster on the argument that, as Stormont was a devolved Parliament responsible for domestic affairs in the province, it should be left alone to get on with it. At the same time the Labour government had come to power in 1964 promising to address Catholic grievances and work to bring about reform. It would do this, not by direct intervention but by encouraging the apparently ‘liberal’ Prime Minister of Northern Ireland, Terence O’Neill, to press ahead speedily with the necessary changes.

Labour Government Labour Party Domestic Affair Direct Rule Actual Phrase
These keywords were added by machine and not by the authors. This process is experimental and the keywords may be updated as the learning algorithm improves.
This is a preview of subscription content, log in to check access.