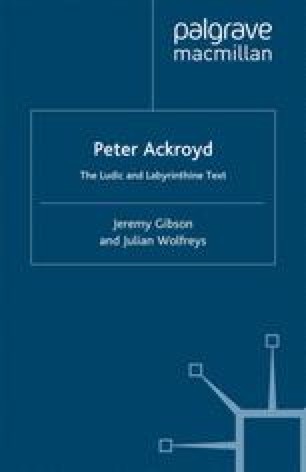 ‘Endless Variety’: Writing the City in the Biographies, The House of Doctor Dee & Dan Leno and the Limehouse Golem

London holds a significant place in many of the texts of Peter Ackroyd, a significance which may well be brought to the fore in unexpected and unpredictable ways with the publication of Ackroyd’s forthcoming Secret London.1 Not merely the stage on which his narratives are enacted, the city of London is itself theatrical, a performative phenomenon more accurately described not as a place, but as that which takes place. There is an unending reciprocity between the city and the writing subject. As there is always one more undiscovered street, so there is always another story to tell. As one reviewer puts it, in a review of Dan Leno and the Limehouse Golem, ‘The crepuscular atmosphere of industrial London … meticulously evoked by the author … is no mere backdrop for the action; it is the reason for it’ (Meyer 1995). As Ackroyd himself asserts in his biography of Charles Dickens, the dark reality of nineteenth-century London determines the novelist’s vision of the city, which vision in turn, as a response to that darkness, adds ‘to the reality itself…. When we see London now, it is in part his own city still’ (D 275). London is written by Ackroyd and it, in turn, writes his characters, whether those characters are the fictional Tim Harcombe, Goosequill, or Nicholas Dyer, or the figures of Charles Dickens, William Blake and Thomas More. The Act of writing the city, and the city’s performative projection onto the condition of the subject, effectively dismantles any neat distinction between the word and the world, writing and reality.2 This is not to suggest that the world, or what we call ‘reality’ does not exist. Rather, the point is, that Ackroyd’s writing, and, specifically, his engagement with the urban space, unfolds the interwoven and essentially textual condition of the world and our perception or comprehension of it.

Urban Event Oxford Street Broad Street British Title Urban Experience
These keywords were added by machine and not by the authors. This process is experimental and the keywords may be updated as the learning algorithm improves.
This is a preview of subscription content, log in to check access.