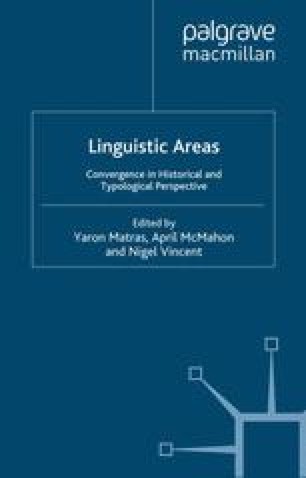 Structural Isoglosses between Khoekhoe and Tuu: The Cape as a Linguistic Area

In historical times, the wider Cape region, including the Orange River area, hosted languages of two very different Khoisan language families, namely of Tuu (specifically its !Ui branch) and Khoe (specifically its Khoekhoe branch). Khoekhoe displays a number of linguistic features that do not exist in the languages of its genealogical sister, the Kalahari branch of Khoe. A comparison beyond the limits of this family shows that the innovative structures in Khoekhoe often have a great similarity to properties of the Tuu family, particularly its !Ui branch. This observation leads to the hypothesis that the genuine linguistic character of Khoekhoe vis-à-vis Kalahari Khoe is to a considerable extent the result of contact with Tuu languages, which have been in the relevant area for a longer time. This chapter will (a) outline briefly the historical context of the contact situation; (b) identify commonalities of the two groups, with a particular focus on the assumed Tuu substrate interference in the morphosyntax of Khoekhoe; and (c) discuss a few implications of the data for the population history in southern Africa and for historical and contact linguistics in general.

Noun Phrase Verb Phrase African Language Complex Predicate Feminine Gender
These keywords were added by machine and not by the authors. This process is experimental and the keywords may be updated as the learning algorithm improves.