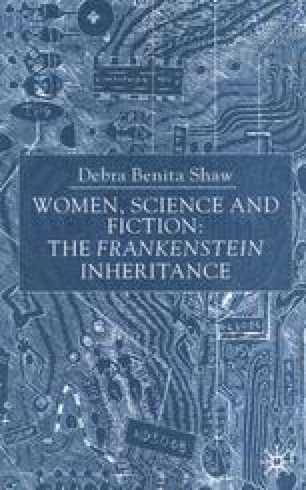 Body of Glass: Marge Piercy and Sex in Cyberspace

For my final chapter, I want to reinvoke the Frankenstein scenario with which I started. But, alongside the notion of the young Mary Shelley, listening in near silence to the debates of Byron, Shelley and Polidari, I will locate the monster his/her/itself as others like Laura Kranzler2 have done, as a metaphor for the idea of monstrousness as pertaining to a woman ‘out of place’ or ‘aberrant’. While, as Brian Aldiss has pointed out3, Shelley’s biography invites an analysis which allies her act of creation to the (mis)creation which the monster represents, I read it also as a precursor of Haraway’s cyborg: in other words, as an image of manumission or a parable of restructured identity and thus a highly charged political trope. In the same way that the cyborg is able to be imagined by selves that are ‘out of place’,4 and enjoyed as a fluid construction based on outsider identities, so the monster can also be appropriated by those of us that resist both essentialism and the biologically determinist constructions of patriarchal culture, as a myth which codes that resistance.

Female Character Jewish People Wild Card Hebrew Word Data Construct
These keywords were added by machine and not by the authors. This process is experimental and the keywords may be updated as the learning algorithm improves.

Within the metaphors and fictions of postmodern discourse, much is at stake, as electronic technology seems to rise, unbidden, to pose a set of crucial ontological questions regarding the status and power of the human. It has fallen to science fiction to repeatedly narrate a new subject that can somehow directly interface with — and master — the cybernetic technologies of the Information Age….