Corporate Governance in a Changing Economic and Political Environment 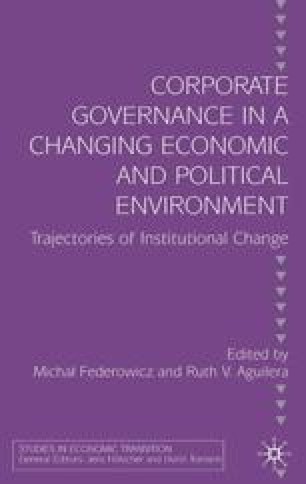 The main challenge of cross-national analyses is to identify and conceptualize the most significant concepts so that they can be applied across borders. Corporate governance, the key notion of this book, has evolved over the last ten years from the single principal-agency problem to a much more complex structure of stakeholders’ relations in the agency game (Aguilera and Jackson, 2003). This development is the result of comparative studies of advanced economies, which took the concept of the agency problem from the American-based debate over managerial incentives and set it in the institutional context of other countries, most notably Germany and Japan (Hoshi et al., 1991; Gerlach, 1992; Roe, 1993; Berglöf and Perotti, 1994; Soskice, 1994; Lehrer, 1996; Vitols et al., 1997; Casper, 1999; Aoki, 2000). The broader meaning of corporate governance, utilized by the authors in this book, contributes to an understanding of the profound differences between institutional settings of the three leading national economies in contemporary capitalism. The triad comparisons — US/UK, Germany, Japan — became the most persuasive evidence in debates over the deeply rooted divergence between advanced economies that persists in spite of strong converging pressures. It has also contributed to the Variety of Capitalism (VoC) approach (Dore et al., 1999; Hall and Soskice, 2001), which points, in political economy terms, to the “comparative institutional advantage” of each country.

Foreign Direct Investment Corporate Governance Product Market Institutional Change Institutional Setting
These keywords were added by machine and not by the authors. This process is experimental and the keywords may be updated as the learning algorithm improves.
This is a preview of subscription content, log in to check access.