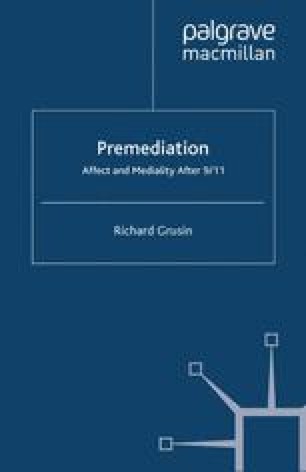 The Affective Life of Media

Elsewhere I have developed the concept of a cinema of interactions to describe the media hybridity that is one of the defining conditions of contemporary mediality (Grusin, 2007).1 Significant media events are no longer confined to a single medium, but are distributed across a variety of media forms and practices. Popular music, Hollywood films, or networked television series are distributed across DVDs, the Internet, fan communities, publicity media, and so forth. As we saw in the case of the horrifying behavior at Abu Ghraib, social, cultural, and political events as well exist today only insofar as they mobilize and are mobilized by a network of complementary and overlapping media forms and practices. Media can no longer be seen to operate as the distinct, autonomous forms defined by the medium specificity that dominated much twentieth-century discussion of cinema and other media, but are now better described in terms of tendencies or translations or attributes. With MP3 players, web browsers, cameras, and video recorders built in to our computers, mobile phones, and other personal digital devices, all of our media interact and combine to the extent that it no longer makes sense to consider specific media in formal, cultural, or technical isolation. Media themselves help to construct and maintain assemblages of humans, technologies, and nature, at the same time that they emerge from and are part of the assemblages they maintain and construct.2

Video Game Affective State Affective Computing Affective Intensity Affect Theory
These keywords were added by machine and not by the authors. This process is experimental and the keywords may be updated as the learning algorithm improves.
This is a preview of subscription content, log in to check access.