Charles Dickens, A Tale of Two Cities and the French Revolution 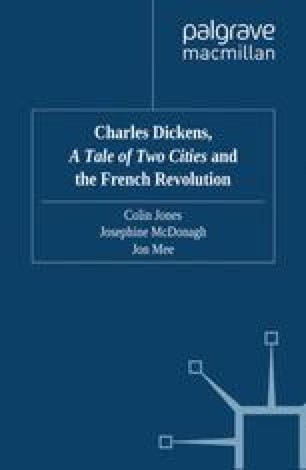 Charles Dickens, A Tale of Two Cities and the French Revolution pp 41-63 | Cite as

The Redemptive Powers of Violence? Carlyle, Marx and Dickens

Among the many questions raised by the French Revolution of 1789, one in particular haunted the imagination of the nineteenth century: its violence. No one could deny that the Revolution had produced momentous and lasting changes. The Europe of the ancien régime had been destroyed and all attempts to restore it had foundered. But these changes appeared to be inseparable from the violence that had brought them about. Violence, it seemed, had not been incidental to the Revolution, but inherent in its popular character. Popular sovereignty had gone together with crowd coercion and a reign of terror. Hunger, long-held grievances and the provocations of the Old Order were among its precipitants. But, by any measure, it had been excessive, and its legacy had been an unforgettable cluster of images of the burning of chateaux, of the destruction of the Bastille, of angry crowds, summary justice and the hanging lamppost (the lanterne), of the execution of a king and queen, and most of the leaders of the Revolution itself, of the Terror and the guillotine, of women with the ferocity of ‘tigers’ — the tricoteuses, knitting while heads fell, of revolutionary armies, of the desecration of churches and the mass drownings (noyades) of Jean-Baptiste Carrier.

French Revolution Popular Sovereignty Political Symbol French People Jewish Question
These keywords were added by machine and not by the authors. This process is experimental and the keywords may be updated as the learning algorithm improves.
This is a preview of subscription content, log in to check access.