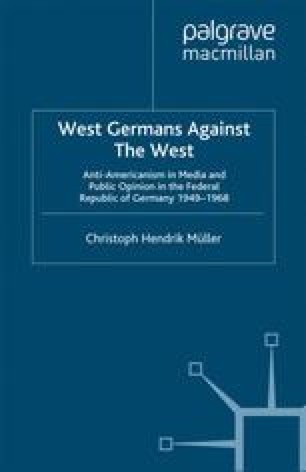 Whereas the previous chapter, especially sections 3.2 and 3.3, presented ‘America’ as a country of cold-blooded capitalism, dominated by a pure profit orientation and ‘Wall Street’ greed, this chapter investigates an almost diametrically opposed Amerikabild: the USA as a country of mass hedonism and equality. According to contemporary opinion polls, the USA was seen in West Germany as the country where workers had the best living conditions in the world: in October 1952, 47 per cent thought that America offered the best conditions, whereas only 10 per cent opted for Germany and a mere 1 per cent for the Soviet Union.1 Although not overtly concerned with class equality, the issue does enter the equation when looking at mass consumerism, particularly in relation to a new style of quintessentially American music: rock and roll (section 4.4). Realistically, there never seems to have been a danger of a social revolution instigated by rock and roll, but conservative circles in 1950s Western Germany feared exactly that. More importantly, the equality issue comes into focus when addressing the issue of gender and sex (section 4.5). ‘Egalitarian Americanism’, as defined by Kaspar Maase, identifies the USA as a supposedly less hierarchical society. The promise of equality, or at least the equality of opportunity, is as tempting a concept of ‘self-Americanisation’ as is the prospect of breaking down social and socio-cultural barriers and hierarchies.2

American Woman German City German Woman Concert Hall Weimar Republic
These keywords were added by machine and not by the authors. This process is experimental and the keywords may be updated as the learning algorithm improves.
This is a preview of subscription content, log in to check access.