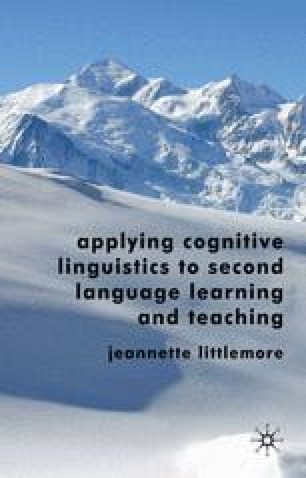 ‘You’ll find Jane Austen in the basement’ … or will you? Metonymy and Second Language Learning

Recently, I had a conversation with a postgraduate student from Singapore who had a part-time job at the university nursery. She told me that when she first began working at the nursery she had been puzzled by the expression ‘s/he’s got a loose nappy’, which was used frequently by the nursery staff to talk about one of the babies. Whenever she heard this, she duly checked that the baby’s nappy was fitted correctly. It was only after a few days in the nursery that she realised the expression did not actually mean that the nappy was literally loose, but meant, in fact, that the nappy needed changing. It was not the nappy itself that was loose, but the bowels of the baby in question (Tang, 2007). What she had not understood was that the expression ‘loose nappy’ was not being used literally, but metonymically.

Language Learner Target Language Discourse Community Language Classroom Cognitive Linguistic
These keywords were added by machine and not by the authors. This process is experimental and the keywords may be updated as the learning algorithm improves.
This is a preview of subscription content, log in to check access.