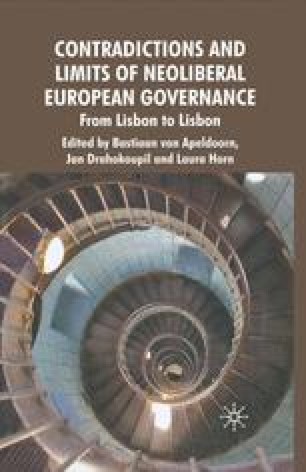 The Contradictions of ‘Embedded Neoliberalism’ and Europe’s Multi-level Legitimacy Crisis: The European Project and its Limits

The sudden and unexpected death that the European Constitution met in French and Dutch voting booths in the late spring of 2005, and the post-referendum blues that followed it, brought into the open a legitimacy crisis of the European project that had been looming for years, and that arguably will now deepen with the Irish rejection of the Lisbon reform treaty that was intended to replace the failed Constitution. What is in fact a multi-level legitimacy crisis — inasmuch as national states find it equally hard to maintain the legitimacy of their policy output and national governments often blame Europe in the process1 — has called into question the coherence and foundations of the European integration process as a political and socio-economic project, which has been guiding the restructuring of state-society relations within Europe’s transnational political economy over the past decades.

European Union Hedge Fund European Central Bank European Project Lisbon Strategy
These keywords were added by machine and not by the authors. This process is experimental and the keywords may be updated as the learning algorithm improves.
This is a preview of subscription content, log in to check access.

Cite this chapter as:
Apeldoorn B.. (2009) The Contradictions of ‘Embedded Neoliberalism’ and Europe’s Multi-level Legitimacy Crisis: The European Project and its Limits. In: van Apeldoorn B., Drahokoupil J., Horn L. (eds) Contradictions and Limits of Neoliberal European Governance. Palgrave Macmillan, London. https://doi.org/10.1057/9780230228757_2