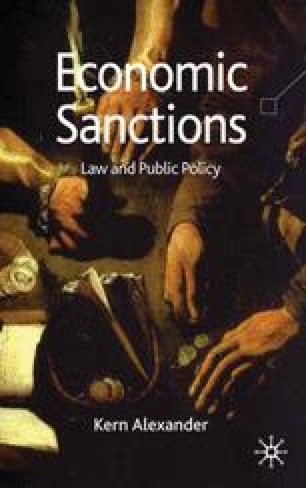 The Origins and Use of Economic Sanctions

The use of economic sanctions has throughout history been an integral component of the foreign policy of most nation-states. Nations have relied on economic sanctions not only to influence foreign policy and national security objectives but also to respond to domestic political needs and economic pressures. In antiquity and in early modern Europe, economic sanctions were used for a variety of purposes but mainly as subordinate instruments of military policy during times of war.2 Indeed, Athens imposed economic sanctions in 432 BC when Pericles issued the Megarian import embargo against the Greek city-states which had refused to join the Athenian-led Delian League during the Peloponnesian War.3 During the religious wars of Europe’s reformation, states used trade embargoes and other economic sanctions to compel compliance with treaty obligations to protect certain Christian minorities.4 In the late nineteenth century, economic sanctions were generally used during times of war and took the form Export controls on strategic supplies and blockades against targeted countries (Medlicott, 1952, 9).

Foreign Policy Security Council Business Entity Economic Sanction Export Control
These keywords were added by machine and not by the authors. This process is experimental and the keywords may be updated as the learning algorithm improves.

Neither war nor economics can be divorced from politics; each must be judged as an instrument serving the higher goals of the polity.

To Sanctions of an economic character we will reply with our discipline, with our sobriety, and with our spirit of sacrifice1