The Philosophy of Friendship 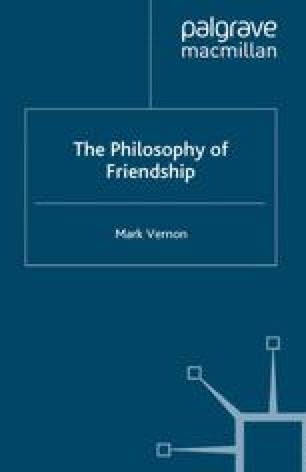 The Philosophy of Friendship pp 50-71 | Cite as

The best of friends can be found in the most unlikely of places. Few would associate Friedrich Nietzsche with friendship, for example. In the popular imagination this nineteenth-century philosopher is ‘depressing’; he spoke in the language of fire and ice, proclaimed the death of God and created the character of Zarathustra who wanders alone in mountains and deserts. If people know anything of his life it might be that he fell out with his sometime mentor and friend Richard Wagner (the split was of operatic proportions). So to most, including those philosophers who have studied his work, he is not readily associated with the affectionate spirit of amity.

Good Friend Wide Circle Popular Imagination Lake Lucerne 33rd Birthday
These keywords were added by machine and not by the authors. This process is experimental and the keywords may be updated as the learning algorithm improves.

Most friendship is feigning.