Racism and Education in the U.K. and the U.S. 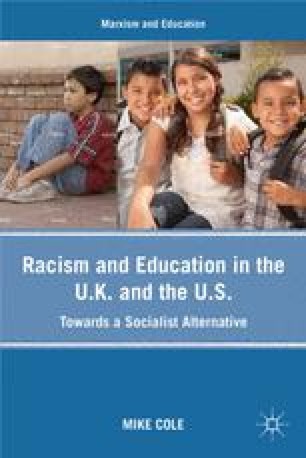 Racism in the U.S.

Chapter
Part of the Marxism and Education book series (MAED)

Racism in the U.S. differs in many, though not all, aspects from the U.K. This is, in part, because of the two countries’ different economic and political histories, not least, respective differences in colonization (the U.K. were early colonizers; the Americas, and what was to become the U.S., early colonized) and migration patterns. However, what both countries have in common is that in both, there exists a multitude of different forms of racism. In chapter 2 of this volume, I argued that one of the reasons it is important to categorize various forms of racism is to effectively challenge it. I then proceeded to delineate the plethora of manifestations of racism in the U.K. I concluded with a consideration of contemporary counter-hegemonic resistance to racism. I do the same in this chapter with respect to racism in the U.S., considering respective forms of resistance.throughout the chapter. I begin by looking at the legacy of Christopher Columbus, addressing myself to the situation of Native Americans both historically and contemporaneously. Next I move on to a consideration of the history of slavery in the U.S., followed by some issues connected to the lives of African Americans, post-slavery and today. After that I look at racism experienced historically and currently by Latina/o Americans, before moving on to trace the history of and the current realities for Asian Americans. I conclude my analysis of different groups with a consideration of Native Hawaiians and Pacific Islander (NHPI) Americans.

Migrant Worker Slave Owner Critical Race Theory Institutional Racism Model Minority
These keywords were added by machine and not by the authors. This process is experimental and the keywords may be updated as the learning algorithm improves.
This is a preview of subscription content, log in to check access.