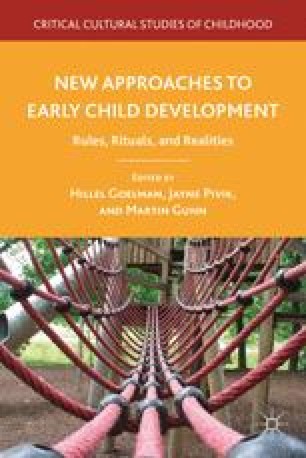 Conclusions and New Beginnings: What We Have Learned about the Rules, Rituals, and Realities of Interdisciplinary Research

Throughout this book we have attempted to describe the theory, the process, and the relevance of Bronfenbrenner’s bioecological framework to the growing body of research on interdisciplinary research1 on young children from the medical, health, and social sciences. While not conducted from a reconceptualist perspective, which is the major theoretical orientation of the Critical Cultural Studies in Early Childhood series in which this book appears, we see many areas of consistency between the reconceptualist perspective and the interdisciplinary perspective that guided the CHILD Project. This book contributes to the stated intention of this series to “open up new spaces for dialogue and reconceptualization” (Palgrave Press Brochure, 2010). In this chapter we discuss why this book will open an intellectual space where the reconceptualist and the interdisciplinary perspectives can inform and complement one another.

Child Care Interdisciplinary Research Cultural Competence Community Partner Early Child Development
These keywords were added by machine and not by the authors. This process is experimental and the keywords may be updated as the learning algorithm improves.

Yet, in order to live, to breathe and to generate novelty, human beings have had to create—by structural means—spaces and times in the calendar or, in the cultural cycles of their most cherished groups which cannot be captured in the classificatory nets of their quotidian, routinized spheres of action. These liminal areas of time and space—rituals, carnivals, dramas and, latterly, films— are open to the play of thought, feeling and will; in them aregenerated new models, often fantastic…