Cognition in the Globe 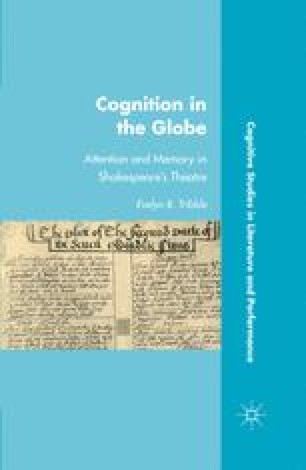 From the triad of “insides, objects, and people” set forward in the Introduction I have thus far focused primarily upon the first two elements. But no account of any distributed cognitive system can neglect the absolutely crucial role of “people,” or the complex social structures that integrate with and, in turn, modulate the cognitive mechanisms, objects, and environments that constitute the early modern playing company. Indeed, separating these elements is something of an artificial exercise, as their coordination is the key principle of Distributed Cognition. As argued in Chapter 1, for example, only by integrating study of the cue-script into an account of the social coordination of the company members can this cognitive artifact be fully understood. Nevertheless, the structures and practices of the company merit attention in themselves, for these ultimately give shape and form to the plays. This chapter develops further my analysis of the early modern theatre as a workplace through an extended discussion of the

Situation Awareness Explicit Instruction Female Role Cognitive Artifact Apprentice System
These keywords were added by machine and not by the authors. This process is experimental and the keywords may be updated as the learning algorithm improves.
This is a preview of subscription content, log in to check access.

Cite this chapter as:
Tribble E.B. (2011) Social Cognition: Enskillment in the Early Modern Theatre. In: Cognition in the Globe. Cognitive Studies in Literature and Performance. Palgrave Macmillan, New York. https://doi.org/10.1057/9780230118515_4