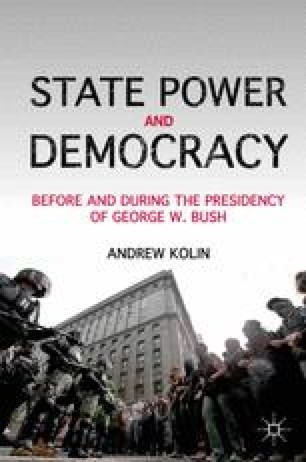 Actions Taken against Enemies of the State

The administration’s intention to transport al Qaeda and Taliban prisoners to Guantanamo Bay was announced on December 27, 2001, by Defense Secretary Donald Rumsfeld. The next day, the memo by John Yoo of the Office of Legal Counsel enabled the administration to create a legal fiction, to place prisoners outside the U.S. court system. The memo prevented prisoners from using habeas corpus and argued that in leasing Guantanamo Bay from Cuba, the United States had jurisdiction and control over the base. Another memo by Yoo and special counsel Robert Delahanty excluded prisoners alleged to be members of al Qaeda and the Taliban from protections of Article 5, which says that captured members of either group have the right to be identified and treated as POWs. It argued that members of these groups cannot be considered POWs because they are terrorists, exhibiting the mindset that only the administration can determine which individuals are members of terrorist organizations. It wasn’t written to enable the capture of actual terrorists; it was designed to apply to anyone in custody, regardless of the evidence.

Nuclear Weapon Attorney General Bush Administration Geneva Convention Executive Branch
These keywords were added by machine and not by the authors. This process is experimental and the keywords may be updated as the learning algorithm improves.
This is a preview of subscription content, log in to check access.