Neoconservatism and the New American Century 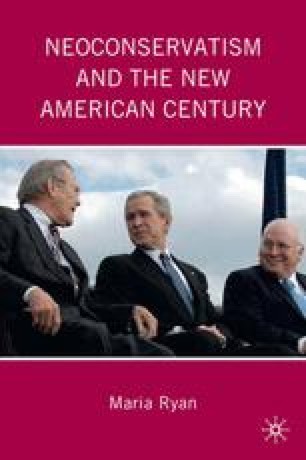 Neoconservatism and the New American Century pp 71-90 | Cite as

“Time for an Insurrection”: From the Dole Campaign to the Project for the New American Century

Despite William Kristol’s optimistic determination to continue to promote an expansive foreign policy, by April 1996—a whole seven months before the Presidential election—he had already resigned himself to a defeat, probably a heavy one. Senator Bob Dole (R-Kansas), the Republican candidate, “may lose badly,” he told readers of The Weekly Standard. In particular, Dole lacked a vision of America’s role in the world. Yet despite this gloomy prognosis, Kristol urged conservatives to “aggressively prosecute their case and advance their cause with little regard to Dole.” What was important was that Republicans prevented a Dole defeat from “derailing the ongoing Republican realignment and from blocking the emergence of a new era of conservative governance.” For Kristol, the 1996 campaign was primarily to be used as a platform to project a new Republican foreign policy that would transcend the election. If this was done with sufficient vigor, it was not completely beyond the realms of possibility that Dole might even eke out a victory. “His best chance to win the Presidency,” Kristol claimed, “is if others create a political environment that sweeps him in.”1

Foreign Policy Middle East Moral Ideal Republican Party Strategic Interest
These keywords were added by machine and not by the authors. This process is experimental and the keywords may be updated as the learning algorithm improves.
This is a preview of subscription content, log in to check access.