Gender and Decolonization in the Congo 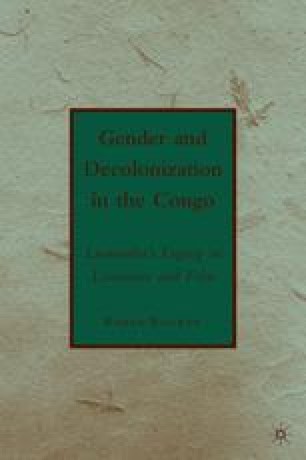 Gender and Decolonization in the Congo pp 71-99 | Cite as

Andrée Blouin: A Sister Among Brothers in Struggle

Andrée Blouin was born in Obangui-Chari (today Central African Republic) in 1921 to Josephine Wouassimba, a fourteen-year-old Banziri girl from the Kwango region, and Pierre Gerbillat, a French colonial businessman. She was placed in a Brazzaville orphanage for children of mixed race at the age of three, ran away when she was seventeen, and fell prey to mistreatment by white men, first as concubine and later as wife. Traveling to Guinea in the 1950s with the man from whom she would take her name, she joined Sékou Touré in his revolutionary activities before returning to Central Africa. After mobilizing women for the African Solidarity Party (Parti Solidaire Africain, PSA) in the Kwilu region of Congo, she became the chief of protocol in Patrice Lumumba’s government. My Country, Africa: Autobiography of the Black Pasionaria, a title that frames her life in terms of race and pan-African allegiance, was published in 1983 in English with the collaboration of Jean MacKellar. Blouin’s account of events up to the mid-1960s is followed by a brief epilogue by MacKellar.

Black Woman African Woman Mixed Race Racial Ideology Colonial Authority
These keywords were added by machine and not by the authors. This process is experimental and the keywords may be updated as the learning algorithm improves.
This is a preview of subscription content, log in to check access.

Cite this chapter as:
Bouwer K. (2010) Andrée Blouin: A Sister Among Brothers in Struggle. In: Gender and Decolonization in the Congo. Palgrave Macmillan, New York