University Coeducation in the Victorian Era 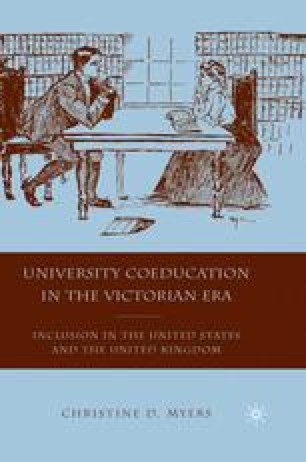 University Coeducation in the Victorian Era pp 119-144 | Cite as

The extracurricular, or” extra-academic life,” of students at coeducational universities provides some of the most compelling evidence that the students themselves wished to maintain separate spheres of activity despite working toward the same degrees.1 As discussed in the previous chapter, administrators in the nineteenth century did their best to restrict male and female students to separate areas of the campus by offering separate facilities to each. These regulations were relaxed over time, and the students slowly began integrating in all areas of campus life. The amount of gender mixing remained limited, though, and as Lynn D. Gordon points out in Gender and Higher Education in the Progressive Era, ”men’s and women’s student lives proceeded along separate, although parallel, paths.”2 Sometimes this separation was encouraged by the administration, sometimes by the male students, and sometimes by the women themselves who preferred to have their own groups that appealed to their own skills and plans for their future lives. A mixture of academic organizations and those which were intended to be primarily social was a standard feature on most campuses. Athletics of an informal or formal nature were also increasing in popularity during the nineteenth century, with students having a chance to participate or be spectators. This variety of groups and activities meant that students had ample opportunities to improve their minds and bodies, and some associations even enabled them to look after their souls as well.

Female Student Male Student Extracurricular Activity Public Speaking Woman Student
These keywords were added by machine and not by the authors. This process is experimental and the keywords may be updated as the learning algorithm improves.
This is a preview of subscription content, log in to check access.