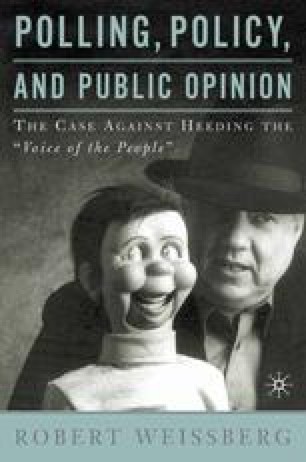 The American public’s overwhelming endorsement of President Clintons proposed teacher and daycare plans is incontrovertible. Recollect the January 1998 Los Angeles Times poll—82 percent agreed with his childcare proposal, while 79 percent favored federal money to reduce early grade classroom size. Both endorsement figures closely resemble past probes with virtually identical wording (and reaffirm the more general infatuation with the modern welfare state). Moreover, congressional foot-dragging regarding these initiatives, together with intermittent expert skepticism did not cool popular eagerness. A March 2000 Angus Reid national survey (two years after the proposals were initially broached) confirmed this abiding statist sentiment—both the hiring of new teachers and the federal governments daycare role remain highly popular.1 No doubt, scholars interpreting “democracy” as close alignment between public sentiment and government action will chalk up yet one more “mismatch” between public desires and what government happily supplies. Bill Clinton also might have “reasonably” castigated tight-fisted congressional Republicans for being “out-of-tune” with this expertly ascertained public opinion.

Public Opinion Cost Overrun Improve Student Performance Education Sample Wasteful Disaster
These keywords were added by machine and not by the authors. This process is experimental and the keywords may be updated as the learning algorithm improves.

The most may err as grossly as the few.