The Encyclopedia of Murder and Mystery 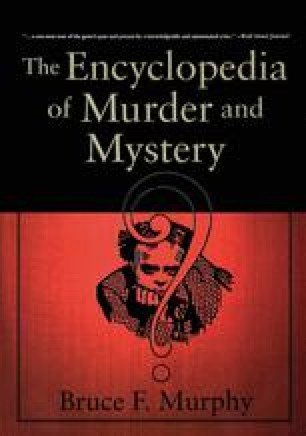 The Encyclopedia of Murder and Mystery pp 1-543 | Cite as

AARONS, EDWARD S[IDNEY] (1916–1975) Edward S. Aarons was one of the most prolific writers in the genre, turning out more than 40 novels about CIA agent Sam DURELL as well as another two hundred stories and novelettes. Aarons was born in Philadelphia and worked as a newspaperman and in a series of odd jobs. His schooling was interrupted by World War II, in which he served in the Coast Guard, and he received his degree from Columbia University after the war. Although he had published his first mystery novel in 1938, Death in the Lighthouse, it was in the fifties that he began to turn out books at a great rate. He wrote under the pseudonyms of Edward Ronns and Paul Ayres as well as under his own name. Aarons’s work stresses action, adventure, and exoticism. Many of the Durell novels were named for the dangerous ingenues the agent was “assigned” to and usually slept with. Among his non-series novels is The Catspaw Ordeal (1950), a tale of espionage and betrayal set on the Connecticut coast. Many of his books have heroes defeating the diabolical forces of communism and foreigners, and the black-and-white attitude to U.S. Cold War foreign policy and hawkishness of the books is somewhat distasteful; however, Aarons’s failure to create believable characters and the lack of modulation in his stories are bigger problems.