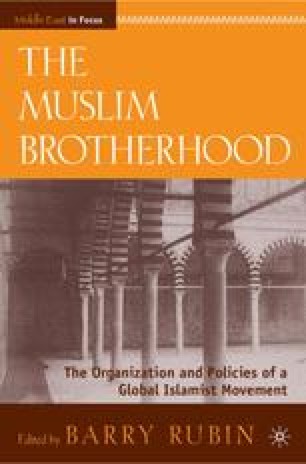 Palestinian Islamic politics have been dominated in the past three decades by the Muslim Brotherhood, later known as the Hamas. With its seizure of the Gaza Strip, Hamas came to be a virtual government, competing for leadership of all Palestinians on a near-equal basis with Fatah and its Palestinian Authority (PA) regime. Thus, Hamas can be said to be the only Muslim Brotherhood group in the world that also forms a government and rules over large numbers of people.

Gaza Strip Security Force Arab State Muslim Brotherhood Palestinian Authority
These keywords were added by machine and not by the authors. This process is experimental and the keywords may be updated as the learning algorithm improves.
This is a preview of subscription content, log in to check access.