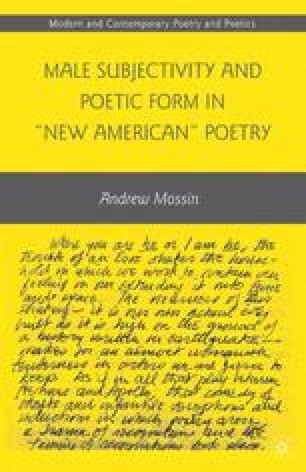 Recovering the Public World: Robin Blaser, Hannah Arendt, and the Discourses of Self and Other in Image-Nations 1–12

When Robin Blaser and Robert Duncan had their falling out in late 1965 over ostensibly poetic matters related to their translations of Gérard de Nerval’s sonnet sequence Les Chimères, what became most immediately apparent perhaps were the fundamentally different ways in which they understood the poet’s role in the writing process and the nature of poetic language. Moreover, as a staged battle over the ethics and aesthetics of translation, the quarrel also revealed fundamentally different stances toward the relationship between language and subjectivity. While Duncan preserved in that conversation a rigid belief in language as gnosis and the poet as scribe and auditor of universalist meaning, Blaser’s approach was to view Nerval’s language through the lens of Arendt’s understanding of an ongoing public action, producing meaning through the exchange that occurs when poet and word are translated through the act of speech-making. It’s a critical difference, one that involves two very different versions of subjectivity and agency: Duncan’s privileging the poet’s role in the process of poetic making, arguing for the centrality of the poet’s choices in matters of form and language; Blaser’s keeping to a resolute skepticism about what actually happens when poet and speech are brought together in poiesis, and in so doing suggesting that, as per the epigraph from Arendt at the beginning of this chapter, “nobody is the author” of any given poem. The poems are, for Blaser, just that: given, and their meaning lies not so much in the singularity of any one text as in the web of associations that text images through a language of public recall and politically informed making.

Public Realm Public World Mass Society Poetic Language Public Meaning
These keywords were added by machine and not by the authors. This process is experimental and the keywords may be updated as the learning algorithm improves.

Although everybody started his life by inserting himself into the human world through action and speech, nobody is the author or producer of his own life story. In other words, the stories, the results of action and speech, reveal an agent, but this agent is not an author of his own life story. Somebody began it and is its subject in the twofold sense of the word, namely, its actor and sufferer, but nobody is its author.

discoursing that is to say, running around arranging things, ourselves among them centrifugal, after our brief hangup among things working again and again with that operational language always, an incorporeal matter, sharp as sticks and stones

In a profound sense, poetry always remains at the beginning, where the body is involved in thought—the passion that a man reaches for the world before he has any sense whatever of an uncreated thing like happiness. This involves the “process of image” and the “rhythm of it.” The reading of a poem is the re-enactment of the images of contact with the world.

Cite this chapter as:
Mossin A. (2010) Recovering the Public World: Robin Blaser, Hannah Arendt, and the Discourses of Self and Other in Image-Nations 1–12. In: Male Subjectivity and Poetic Form in “New American” Poetry. Modern and Contemporary Poetry and Poetics. Palgrave Macmillan, New York. https://doi.org/10.1057/9780230106802_5