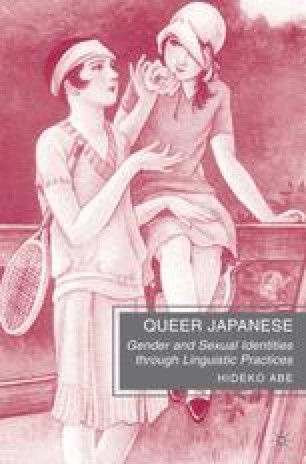 This chapter examines male prostitutes known as àcmshÖ. The Chinese characters for the word are fascinating and quite revealing. This is how the word is rendered in Japanese: ??. “Dim” is the character for “male.” “ShÖ” means “prostitute” and is used with other characters to refer to female prostitutes; for example, the initial addition of the character kÖ (public) creates the term kÖshÖ, or “licensed prostitute,” or gmshÖ, literally meaning “street prostitute.”1 Curiously, shÖ includes the radical for “woman” , making prostitutes female by default. Therefore, a strictly literal translation of àcmshÖ should be “male-female prostitute.” Thus, the idea of male prostitution, as articulated in “àcmshÖ,” connects two men through the figure of the female body or implies that men become women to sell their bodies.

Gender Identity Sexual Desire Sexual Identity Person Pronoun Linguistic Characteristic
These keywords were added by machine and not by the authors. This process is experimental and the keywords may be updated as the learning algorithm improves.
This is a preview of subscription content, log in to check access.