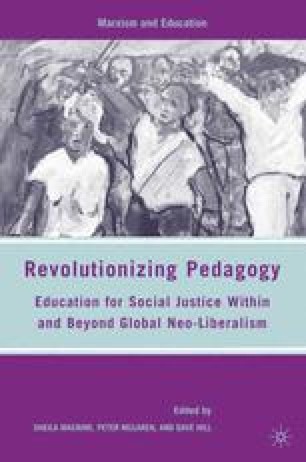 Afterword After Neoliberalism? Which Way Capitalism?

Chapter
Part of the Marxism and Education book series (MAED)

As I write this in early October 2008, the United States and much of the rest of the world face a financial crisis caused by several decades of neoliberal policies. While neoliberal proponents, such as Thomas Friedman (1999), have hijacked globalization to promote neoliberal policies by stating that, “the driving force behind globalization is free market capitalism” (p. 9), and therefore we have no alternative other than to promote deregulation, privatization, and markets, recent economic events reveal neoliberalism as a flawed and failed policy.

Wall Street Journal Participatory Action Research African National Congress South African Government Payer Health Care
These keywords were added by machine and not by the authors. This process is experimental and the keywords may be updated as the learning algorithm improves.
This is a preview of subscription content, log in to check access.