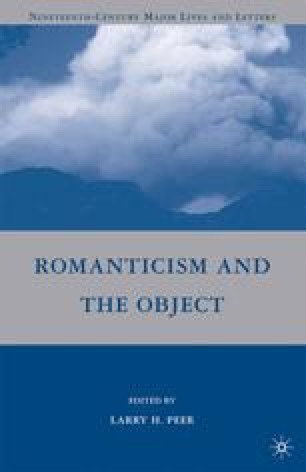 Romanticism and the Object pp 9-16 | Cite as

“Things Forever Speaking” and “Objects of all Thought”

“Things for ever speaking” and “Objects of all thought”: the phrases are from Wordsworth, the first from “Expostulation and Reply,” the second from “Tintern Abbey,” but variations of them appear throughout his verse. To contemporary readers, they seem interchangeable in the vernacular, although not always: such as when I tell you to pack up your “things” but not to pack up your “objects,” or if I affectionately say that you are a “sweet thing” but not, at least to your face, a “sweet object.” To Wordsworth, they were antonyms, contradictions, opposites. And, technically, they are still: the changes in meaning originate in massive cultural, philosophical, sociological, and economic changes during his lifetime. In serious intellectual discourse, every major thinker—Marx, Darwin, Fraser, Freud, John Stuart Mill, even Kierkegaard, Lewis Carroll, Hans Christian Andersen, and Foucault—defined them, in cases other than the vernacular, as different, not even opposites, as different as “Thing theory” and “Object theory”: “Thing theory,” an aesthetic growing out of anthropology, and “Object theory,” a psychological concept explaining family dynamics and human emotional development. Thing-ing is what we are doing in this book, taking a word, concept, object, even person out of its natural or material setting and projecting human values, meanings, or explanations on it.

Oral Tradition Memory Chip Contemporary Reader Human Touch Meane Flower
These keywords were added by machine and not by the authors. This process is experimental and the keywords may be updated as the learning algorithm improves.
This is a preview of subscription content, log in to check access.