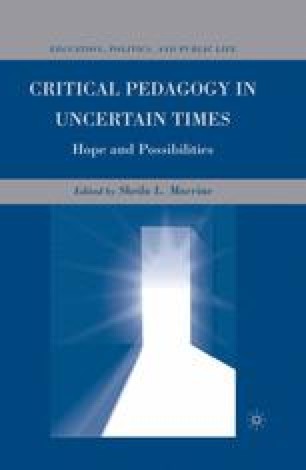 Teaching as Possibility: A Light in Dark Times

Borrowing from a bitter poem by Bertolt Brecht, Hannah Arendt entitled a book of essays, Men in Dark Times.1 The poem, “To Posterity,” she explained, spoke of the horrors taking place in the early days of Nazi rule in Germany and of the absence of outrage. Things were covered up, she wrote, by “highly efficient talk and double talk;” and she stressed how important it always is to have a space in which light can be shed on what is happening and what is being said. Granted, our times may not be marked by the kinds of monstrosities associated with the Nazis; but dark times are no rarity, even in American history. In the darkest moments, she wrote, we still “have the right to expect some illumination … and such illumination may well come less from theories and concepts than from the uncertain, flickering, and often weak light that some men and women, in their lives and their works, will kindle under all circumstances…”2 I view our times as shadowed by violations and erosions taking place around us: the harm being done to children; the eating away of social support systems; the “savage inequalities” in our schools; the spread of violence; the intergroup hatreds; the power of media; the under-mining of arts in the lives of the young. And then I think of the “light that some men and women will kindle under almost all circumstances,” and that makes me ponder (and sometimes wonder at) the work that is and might be done by teachers at this problematic moment in our history.

Social Support System Common World Dark Time Borhood Mother Nobel Prize Lecture
These keywords were added by machine and not by the authors. This process is experimental and the keywords may be updated as the learning algorithm improves.
This is a preview of subscription content, log in to check access.