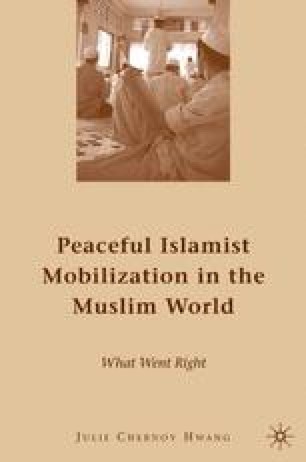 The Effective Participatory State of Malaysia

Among all the cases in this book, Malaysia has the lowest incidence of violent Islamist mobilization. Authoritarian regimes that argue that political liberalization would unleash violent Islamist mobilization and revolution need only to look at Malaysia, an effective participatory state that provides opportunities for institutionalized political participation while refusing to tolerate those groups that use or threaten violence. Malaysians have a great deal of faith in their institutions as channels for political activity. Malaysia has a long history of coalition governance through the institutions of parties and the legislature. This historical legacy has had a profound impact on how Islamist groups mobilize. In contrast to Turkey and Indonesia, Malaysia is governed by a dominant coalition, the Barisan Nasional (National Front, BN), since 1974. Prior to that, another multiethnic coalition, the Alliance, governed the country from independence in 1957 to the 1969 race riots. Thus, interethnic coalition governance has been institutionalized within the political system. This is a fact that is also accepted by the Partai Islam se Malaysia (Malaysian Islamic Party, PAS), the main Islamist opposition party, which also forms coalitions in its contests for political gain.

Opposition Parti Muslim World Religious School Malaysian Government Coalition Governance
These keywords were added by machine and not by the authors. This process is experimental and the keywords may be updated as the learning algorithm improves.
This is a preview of subscription content, log in to check access.