The Impact of 9/11 on Business and Economics 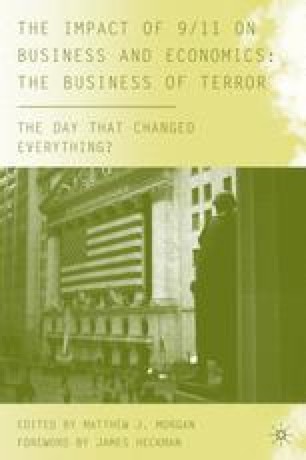 The Effects of 9/11 on the Airline Travel Industry

Chapter
Part of the The Day that Changed Everything? book series (911)

There are few events in modern history that can rival the immediate impact of the 9/11 terrorist attacks on the United States and indeed the world economy. The airline industry was particularly hard hit because commercial airliners were the weapon used by the terrorists in the attacks against the World Trade Center and the Pentagon. In the immediate aftermath of the attacks, the U.S. government grounded the commercial fleet for three days that resulted in a 31.6 percent reduction in travel volume in September of 2001 compared to that same month in 2000 and generated massive industry losses. The fallout prompted a swift congressional response to shore up the industry. Significant changes were also implemented by Congress to enhance transportation security. Specifically, the Transportation Security Administration (TSA) within the Department of Homeland Security was created and charged with maintaining the security of all forms of transportation including the airline industry. Since its formation, TSA has federalized all security personnel, and instituted extensive security precautions on commercial airlines. Although these steps have thus far prevented another successful attack on U.S. soil, they come at a cost. Specifically, they increase the time cost of travel and hence they alter the optimizing calculus of potential travelers.

Terrorist Attack Modal Choice Travel Demand Absolute Percentage Error Airline Industry
These keywords were added by machine and not by the authors. This process is experimental and the keywords may be updated as the learning algorithm improves.
This is a preview of subscription content, log in to check access.