Maintaining Community in the Information Age 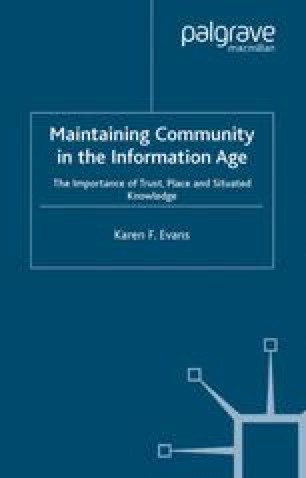 Maintaining Community in the Information Age pp 132-158 | Cite as

Bridging the Digital Divide: What Works?

It is November 2003, Florence, Italy. A European Social Forum has been organised in the city and it is reported that 60,000 delegates from social movements challenging the drive to war, global corporate cultures and the regulation of international trade by bodies such as the World Trade Organization are about to arrive by the train, coach and plane-load to debate and demonstrate their opposition to corporate values and the actions of their national governments. The Italian government, the police and commercial interests are concerned that such a gathering will likely turn to violent activism, destruction of property and riot. The police are deployed in large numbers around the city, ancient and important statues are protected behind scaffolding and hidden behind oilcloths and the commercial core of the town is shut down. Those outlets which feel particularly vulnerable to anti-capitalist sentiment, such as the high-end fashion stores, secure their shutters for the duration of the conference. In the event the demonstrations are good-natured, the debates pass without violent incident and the forum brings a highly politicised atmosphere away from the conference floor and on to the streets.

Community Network World Trade Organization Virtual Community Computer Mediate Communication Digital City
These keywords were added by machine and not by the authors. This process is experimental and the keywords may be updated as the learning algorithm improves.
This is a preview of subscription content, log in to check access.