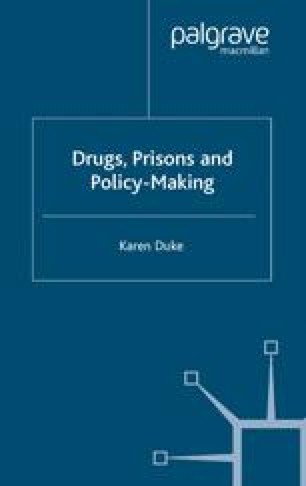 During the period 1993 to 1997, significant developments took place in prison drugs policy. This phase begins in 1993 because this year marked a dramatic U-turn in penal policy which greatly influenced the development of drugs policy in prisons. By 1995, the first prison drugs strategy was formulated involving an explicit and comprehensive plan to tackle and measure the drug ‘problem’ in prisons. In contrast to the earlier phases of policy development, the new strategy incorporated both supply and demand reduction measures. It introduced new powers to test prisoners for drugs, increased security measures and emphasised drug treatment and rehabilitation. For the first time, prison issues were incorporated into national drugs policy and the Prison Service was expected to play a key role in national and local drugs policies and partnerships.

Civil Servant Drug Policy Drug Problem Policy Network Prison System
These keywords were added by machine and not by the authors. This process is experimental and the keywords may be updated as the learning algorithm improves.
This is a preview of subscription content, log in to check access.