The Economics of European Agriculture 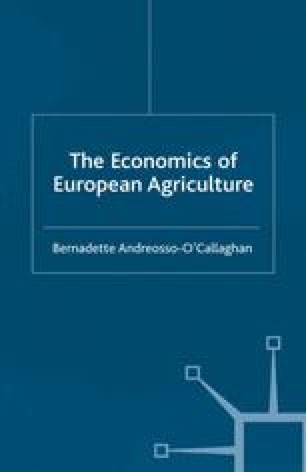 The Economics of European Agriculture pp 252-257 | Cite as

Conclusions: The Future of EU and World Agriculture — The Challenges Ahead

Chapters 1, 4, 5, 7 and 8 have shown the extent to which the EU is a major global actor, not only in terms of food production and trade, but also with regard to its presence on the scene of modern research, that is of biotechnology. For a long time, the EU agricultural system has been portrayed essentially as a closed system favoring the interests of its own farmers, particularly the wealthiest therein, at the expense of the other agricultural systems in the world, particularly those of developing economies. In the last decade, the EU has multiplied the number of trade agreements with the developing world, strengthening its commit­ment to economic development in poor nations. The EU view that developing countries should be accorded special attention and that they should benefit from a special treatment going beyond Lomé, has been vehemently expressed in the recently opened WTO negotiations at the Doha Conference. This laudable standpoint differs from that of the other main agricultural producer and trader in the world, that is, the USA. Moreover, and partly because of outside pressures, the EU has made its CAP more compatible with the world agricultural trading sys­tem over the last ten years. Economic rents in the highly protected EU agricultural system have tended to weaken: export refunds have started being dismantled and producer prices have started to converge towards world prices making the CAP of today more market-oriented than it has ever been before. Even though the increasingly larger compensation payments paid to EU farmers have only changed the nature of support, as opposed to its philosophy, the CAP represents a declining share of the EU budgetary expenditure.

Food Security Trade Agreement Economic Rent Poor Nation World Agriculture
These keywords were added by machine and not by the authors. This process is experimental and the keywords may be updated as the learning algorithm improves.
This is a preview of subscription content, log in to check access.