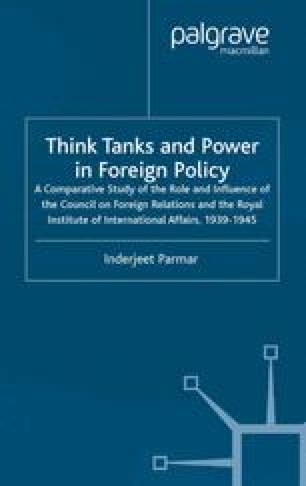 The CFR and Chatham House were not only intimately connected with a myriad of national establishment societies and organisations, as indicated in Chapter 2, but also with one another. This chapter aims to examine the extent and nature of such interconnections from 1919 to 1945. It will be seen that the connections between the two internationalist think tanks were many and varied, ranging from personal correspondence, cooperation in publishing and disseminating literature, exchanges and other visits, joint international conferences and study groups. In addition, of course, they were founded at the same meetings at Paris in 1919–20 and, during the 1920s through the Great Depression to the end of the Second World War, they were financially sustained by the great American philanthropic foundations. However loosely, then, it may be claimed that the leaders of the two think tanks were components of an Anglo-American ‘establishment’.

Foreign Policy World Order Rockefeller Foundation Foreign Relation Carnegie Corporation
These keywords were added by machine and not by the authors. This process is experimental and the keywords may be updated as the learning algorithm improves.
This is a preview of subscription content, log in to check access.