Women and Crime in the Street Literature of Early Modern England 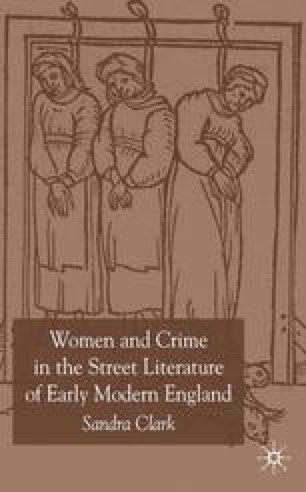 Although plays were not the most obvious medium for handling news stories, the early modern theatre in England did play a significant role in relation to news and current events. Compared with the broadside ballad or the prose pamphlet, which could be composed and printed with great rapidity, a play was less likely to be a disseminator of news, given the more complex processes involved in its production and delivery to an audience, though the speed with which a topical subject could be dramatised and staged should not be underestimated. But the theatre’s capacity for the complex representation of a topical event, for commentary on it, even for making an intervention in a topical debate, and above all for arousing an emotional response to current events, far exceeds those of ballads and pamphlets. There is plenty of evidence that plays that performed any of these functions could create a scandal and sometimes trouble for those involved in the performance. The lost play The Isle of Dogs (1597), by Nashe and Jonson, ‘a lewde plaie … contanynge very seditious and sclanderous matter’,1 possibly to do with trade to Poland,2 and what was perhaps a follow-up, The Isle of Gulls (1606), a political satire aimed at James I’s favourite, Robert Carr, probably caused the imprisonment of at least some of the playwrights.3 Gowrie, another lost play almost certainly dramatising the attempted assassination of the king in Scotland in 1600, performed at court in 1606, offended ‘some great Councllors’;4 and the king was so angered by a lost play, known only through references in official correspondence as the play about ‘the matter of the Mynes’, that he vowed that the performers, the Children of Blackfriars, ‘should never play more, but should first beg their bread’.5

News Story Female Character Realistic Scene Innocent Victim Female Criminality
These keywords were added by machine and not by the authors. This process is experimental and the keywords may be updated as the learning algorithm improves.
This is a preview of subscription content, log in to check access.