Borders in the Baltic Sea Region 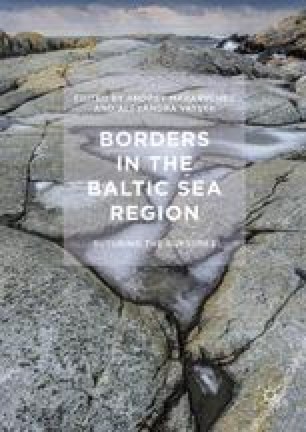 When Left and Right Is a Matter ofIdentity: Overlapping Political Dimensions in Estonia and Latvia

“Socialism” became largely discredited all over Central and Eastern Europe with the collapse of communism, but perhaps more so in the Baltic countries. The three Baltic countries have in common a half-century long history as Soviet republics, but they differ from the rest of the Soviet Union in important respects. Not only because they experienced independence and democratic institutions in the Interwar period but also because they have somehow managed to cut themselves loose from the post-Soviet region, largely dominated by Russia, and aligned themselves with Europe and the West. However, their common Soviet legacy also sets them apart from what we usually call “Central and Eastern Europe”. In particular, they were not in charge of state borders and, thus, could not control the patterns of migration within the USSR. As a result, Estonia and Latvia experienced dramatic population changes over the decades. By 1989, one in three Estonians were from a non-Estonian Soviet republic, usually Russia, without much knowledge about Estonia and the Estonian language. In Latvia, almost half the population was of non-Latvian background at the onset of independence. As the two Soviet republics were loosening the ties with Moscow towards the end of the perestroika period, they were obliged to navigate a very delicate demographic situation. In the spirit of the time, many Russianspeakers were positive about independence, or at least greater autonomy within the USSR, while others fiercely opposed the idea. The majority remained, however, rather passive. The popular fronts—the Estonian Rahvarinne and the Latvian Tautas fronte—kept an inclusive approach towards the minorities, notably in terms of citizenship, but were challenged by more radical nationalists who started a process of registering all pre-Soviet citizens and their descendants and wanted to restrict the body of citizens to these groups. Meanwhile, the former communist parties all but vanished.1 When the two countries eventually introduced their citizenship laws, the Soviet threat was gone, Russia weakened and the radicals had won the argument: practically all Soviet-era immigrants were automatically excluded and it would take many years before the bulk of them became citizens. Many Balts feared that a forceful Russian population, vested with strong political representation, could disassemble the newly independent states and unravel several key priorities (such as security and defence arrangements and European alignments). The overriding notion was that the minority population would have to be co-opted into the citizenry on a gradual basis (Pettai and Hallik 2002). But even with a weak minority presence within the party systems, the ethno-linguistic cleavage was in fact firmly established from the outset and became more dominant as the minority electorate grew stronger and more vocal. This process is still taking place.

Policy Preference Party System Baltic Country Soviet Republic Conservative Party
These keywords were added by machine and not by the authors. This process is experimental and the keywords may be updated as the learning algorithm improves.
This is a preview of subscription content, log in to check access.