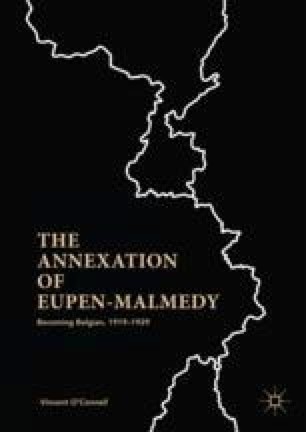 In April 1925, the people of Eupen, Malmedy and St Vith took part in their first national election as Belgian citizens. By June, the transitory regime had been abolished as the population looked forward to a more settled political environment; they were to be disappointed. Belgium’s precarious post-war financial situation exposed it to German irredentist opportunism. This chapter shows how the potential retrocession of Eupen-Malmedy to Germany in exchange for financial concessions became the political soundtrack to the immediate post-Baltia period. Although terminated following French intervention, Belgium’s dubious dealings with Germany on the Eupen-Malmedy question seriously undermined any chance of a successful assimilation of the population. Coupled with Belgium’s incoherent and ad hoc approach to the administration of the districts, this allowed for a resurgence of anti-Belgian feeling to take root.

Stresemann Vandervelde Territorial Revisionism Francqui Enssle
These keywords were added by machine and not by the authors. This process is experimental and the keywords may be updated as the learning algorithm improves.
This is a preview of subscription content, log in to check access.