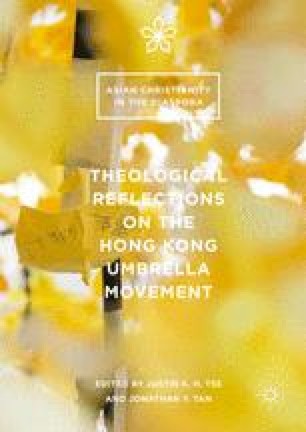 The Umbrella Movement and Kairos: The Church’s Theological Encounter with a Political Movement

The Umbrella Movement marks the watershed of the political movement in Hong Kong. This is the first time that the people of Hong Kong have expressed a relatively strong political consciousness and will, striving for their own destiny with some affirming the movement, others opposing it, but all feeling strongly about it. The Hong Kong government intentionally misinterprets the movement as simply a social movement that can be solved by paying attention to specific policy issues. However, the Umbrella Movement is actually a political movement—a revolution in the consciousness of the people that goes beyond the issues-based nature of social movements—that has reshaped the everyday life of the people of Hong Kong. The movement has caught the attention of the international community, for we are in solidarity with people in the pursuit of human rights. Indeed, it is interesting to see how the Chinese authorities’ response to the movement may also have mirrored the internal political relations of politics in the People’s Republic of China (PRC).

Social Movement Chief Executive Chinese Communist Party Civil Disobedience Political Movement
These keywords were added by machine and not by the authors. This process is experimental and the keywords may be updated as the learning algorithm improves.
This is a preview of subscription content, log in to check access.