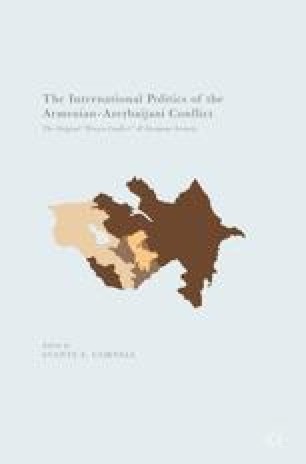 Reversing Escalation: The Local and International Politics of the Conflict

In April 2016, for the third year in a row, news channels carried reports of the gravest violations of the cease-fire between Armenia and Azerbaijan since 1994. Taken together, the incidents of fighting since 2014 indicate that the military situation in the conflict has entered an entirely new stage, bearing little resemblance to the limited shelling that characterized the first 20 years of the cease-fire regime. One reason for this escalation is, no doubt, intrinsic to the two protagonists. Yet it is equally clear that the changing international politics of the conflict are an important factor explaining these developments. Although the conflict has so obviously entered a path of escalation that could trigger a major war, Western states and organizations have shown remarkably little interest, let alone provided a coherent policy response. Other more acute crises have monopolized attention; and the complex dynamics of the conflict, and indeed of its escalation, remain poorly understood. This chapter aspires to build on the contributions to this volume to explain the dynamics of escalation of the conflict, which in turn could lead to a discussion of the potential steps that could help prevent a new war—and perhaps put the conflict on a path to resolution.

European Union Territorial Integrity Peace Process North Atlantic Treaty Organization Occupied Territory
These keywords were added by machine and not by the authors. This process is experimental and the keywords may be updated as the learning algorithm improves.
This is a preview of subscription content, log in to check access.